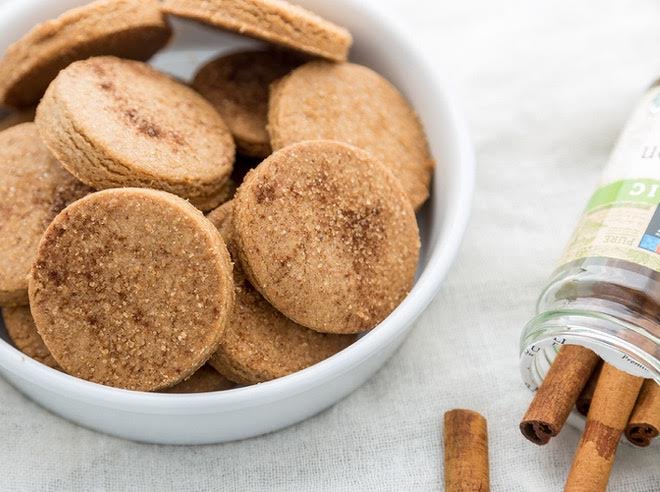 Make the biscuits. Pour into a bowl the flour, salt and cinnamon and stir with a spoon until homogeneous. Throw the butter and both sugar types in the mixer bowl. Beat at medium speed with a whisk, until white and fluffy. Add the egg, vanilla and lemon zest and continue beating until incorporated into the mixture. Finally, add the flour mixture and mix on low speed until the dough comes off the sides of the bowl.

Remove from the mixer and transfer the dough onto a floured work surface. Knead lightly with your hands and shape it into a into a ball. Wrap it in cling film and place in the fridge for one hour to rest.

Preheat oven (circulating air) to 175°C. Brush a little butter on a baking pan and lay in some parchment paper.

Make the topping. In a bowl beat with a whisk the egg with the milk. In another bowl, mix with a spoon the sugar and cinnamon. Leave them aside until we use them.

Bake the biscuits. Remove the dough from the refrigerator, remove the cling film and place on a floured work surface. Divide the dough into 3 equal parts. With a rolling pin open the first part of the dough into a rectangular sheet 2-2.5 cm thick. With a sharp knife cut the sheet into strips and then each strip into rectangular pieces 1-2 cm wide. You can cut the biscuits the size of your choice or even use cookie cutters of your choice.

Place the biscuits onto the baking pan. Brush the surface of each biscuit with a little of the egg-milk mixture and then sprinkle with cinnamon-sugar mixture. Place the pan on the middle of the oven and bake at 175°C for about 15 minutes, until the biscuits are a very nice golden color.

Remove from the oven and transfer the biscuits to a wire rack to cool.